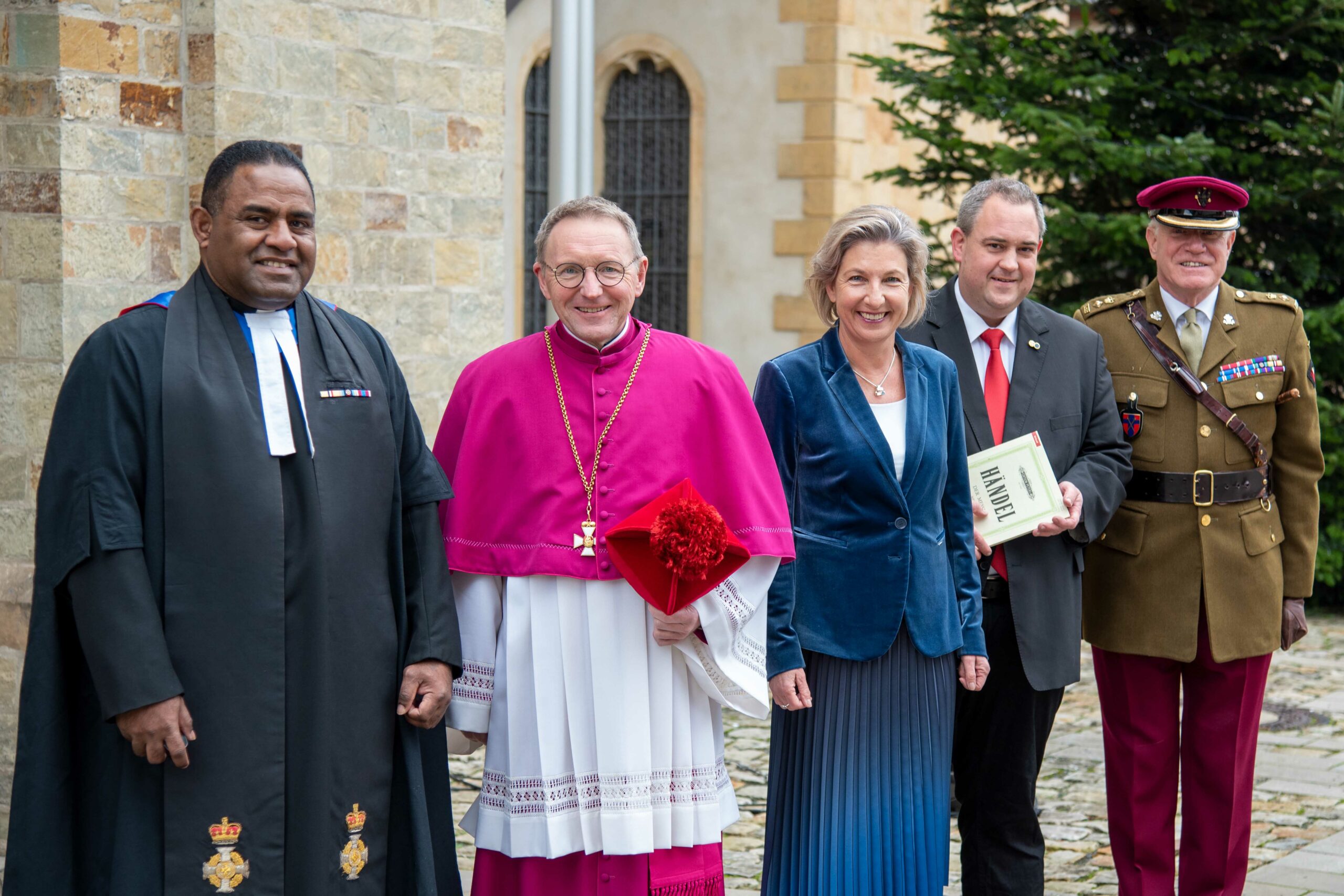 The popular Anglo-German Christmas Carol Service in Paderborn Cathedral will take place again this year in public and without restrictions. The Anglo-German Club Paderborn together with the British Forces in Sennelager and the Metropolitan Chapter invite you to the traditional Christmas Carol Service on Thursday, 8 December, at 7 pm. The ecumenical service with impressive church music will be broadcast on the YouTube channel of the Archdiocese of Paderborn and on the Facebook page of the British radio station BFBS. This year, the proceeds will go to the Army Benevolent Fund (ABF).

For many, the Anglo-German Christmas Carol Service in Paderborn is simply part of the Christmas season. Fortunately, this time it can once again take place publicly and without restrictions in the High Cathedral. Since the supposed emergency solution of the last two years, to broadcast the service via live stream, was so well received with up to 10,000 clicks worldwide each time, the Christmas Carol Service will be offered again this year via the YouTube channel of the Archdiocese of Paderborn (www.erzbistum-paderborn.de). English speakers can follow the broadcast on the Facebook page of the British radio station BFBS.

Readings and music touch the heart

The Anglo-German Christmas Carol Service includes nine readings from the Old and New Testament. They will be read alternately in German and English. The texts bring to life the God’s salvation history with his creation. The readings culminate in the Gospel of the birth of Jesus Christ. The biblical texts are framed and accompanied by German Advent carols and English carols. The popular Advent and Christmas pieces touch the hearts of the people with the message of God’s promises and their fulfilment.

A special highlight will be the British Army Band of the Grenadier Guards under the direction of Captain Rob Smith from Great Britain, with whom the British Army will contribute to the festive atmosphere. In addition, the Paderborn choir Zwischentöne will sing together with friends. The ecumenical service will be presided over by the Anglican Reverend Josefa “Joe” Mairara, the Protestant pastor of the Abdinghofkirche Dr Eckhard Düker and the Roman Catholic cathedral chaplain and dean Benedikt Fischer.

“We are delighted to finally open the church doors to everyone again for the Anglo-German Christmas Carol Service and cordially invite you to get into a festive mood for Christmas in Paderborn Cathedral,” says the chairwoman of the Anglo-German Club Paderborn, Angie Reeh. “And this year we are also happy to include those who bring the Christmas Carol Service into their living rooms via the stream somewhere in the world. We say a heartfelt thank you to the Cathedral Provost Monsignor Joachim Göbel, who acts as the “landlord of the Cathedral”.”

Visitors to the High Cathedral are asked to attend the on-site service only after a negative corona test result. Wearing a medical mask is optional but recommended. The programme booklet will be published on the websites of the Anglo-German Club Paderborn (=here) and the Archdiocese of Paderborn on Tuesday, 6 December.

The proceeds of this special evening will again go to a social project – the Army Benevolent Fund (ABF) – The Soldiers’ Charity – is the British Army’s national charity; for soldiers, past and present, and their families for life. The ABF stands at the forefront of support for the British Army family, last year supporting 60,000 people in 63 countries around the world. As one of the largest funders in the sector, the ABF awards grants to individuals and families, and fund leading organisations that support soldiers, former soldiers, and their families. From helping wounded soldiers to adapt to life after service, to assisting elderly veterans to keep their independence, the ABF supports the British Army family when they need it, offering support in six key areas: independent living, elderly care, education and employability, mental fitness, families and housing.